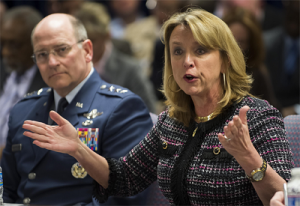 With a struggling economy and more than a decade of heightened defense budgets to support two wars, the U.S. military is already in a  period of transition that will see  budget cut and forced downsizing. No branch of the military is exempted from this reality.

Most recently, the Air Force announced that it will be reducing its ranks and implementing a new numbered Air Force to oversee intelligence, surveillance and reconnaissance missions.

On July 14, 2014, Air Force secretary Deborah Lee James announced that a total of 3,459 positions will be eliminated in an attempt to save $1.6 billion over the next five years. These cuts come one year after Defense Secretary Chuck Hagel ordered each of the four DOD services to reduce their headquarters staff by twenty percent.

“We are aggressively pursuing these cuts within the first year, rather than spread them out over five years as allowed by DOD,” Secretary James said. “It’s better for airmen because it provides them predictability and allows us to re-stabilize our workforce sooner. It also allows us to harvest the savings earlier so that we can plow it back into readiness and some of our key modernization programs.”

The Air Force Management Headquarters Review is intent on deactivating and realigning organizations at headquarters and major commands. The Air force cannot yet announce who will be let go.  The staff members have not even been notified yet. But it has been reported that the largest cuts, 742 positions, will be made at Joint Base Langley-Eustis in Virginia, followed by 734 at the Pentagon.

Also, for the first time since 2009, the service will create a new numbered Air Force. The Air Force Intelligence, Surveillance and Reconnaissance Agency will now be known as the 25th Air Force. The 25th Air Force will oversee all training and operations of ISR air craft and be aligned under Air Combat Command. Its headquarters will be at Joint Base San Antonio, Texas.