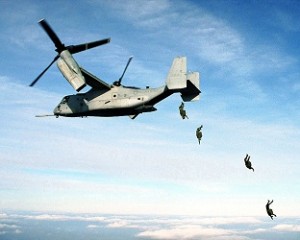 Residents of the Los Angeles area may see a little more of the U.S. military on their city streets than they’re used to. Now, through December 16th, USMC and Navy personnel from the 15th Marine Expeditionary Unit (MEU) will be holding urban combat training exercises in downtown Los Angeles, as well as in other parts of L.A. County.

The mission of the MEU is to provide a rapid-response force, capable of conducting operations from the sea, surface or air. In order to prepare for circumstances that they might see in actual combat situations, the Marine Corps felt it necessary to diversify their training experiences. This exercise in downtown Los Angeles is known as Realistic Urban Training (RUT).

Approximately 2,400 military personnel will raid and clear buildings, and shoot paintballs from modified M-15 rifles as part of the RUT exercise. While these exercises are supposed to occur away from the public, residents have been able to see and hear military helicopters and other aircraft over the exercise area.

The Marine Corps is not giving the exact location or schedule for when the RUT exercises will take place. This is an intentional move to deter the public from becoming spectators who could possibly interfere with the drills. The Marine Corps coordinated with officials from every level of government to prepare for the urban combat training, and they also made sure military and local air traffic would not conflict, Block said.

Several exercises are scheduled for the nearly two-week training event that will train Marines to conduct tactical strikes in a major metropolitan area. Residents will not be in any danger, as no residents live in the spots where the simulated combat will take place. But L.A. residents should keep their eyes open in order to possibly get a brilliant display of the U.S. Marines at work, flying into downtown on V-22 Ospreys and other aircraft.

“Realistic urban training allows the Marines and sailors of the 15th MEU to exercise vital skills to better prepare them for what they may face while forward deployed,” said 15th MEU commanding officer Col. Vance L. Cryer. “Bringing together the entire Marine Air-Ground Task Force in an exercise such as this one allows us quality, realistic training that is essential for unit readiness.”

The RUT exercises will also includes training in Northern California, and on military bases in Nevada and Arizona. It will be the most widespread area the 15th MEU has used for an urban combat training exercise.