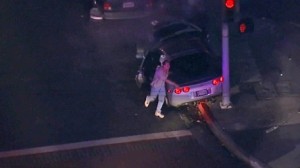 In the aftermath of two separate grand jury decisions not to indict law enforcement officers for the deaths of two American citizens, the media is swamped with public outrage. Footage of peaceful protests and rampaging riots from coast to coast are consistently on the television and streaming on online new sites. But the media has been biased by not giving equal coverage to stories of good police work and their essential roles in our society. These stories could help to quell the emotional and conflicted American public.

Additionally, a story that is not receiving equal airtime this week is out of Los Angeles. The Los Angeles Police Department has ruled that three L.A.P.D. officers were not justified in using deadly force in the December, 2013 shooting death of 51 year old National Guard Veteran Brian Newt Beaird.

On that day, at approximately 9:30pm, L.A. County Sheriff’s Deputies observed Beaird driving erratically in his silver Corvette. When the deputies attempted to pull him over, Beaird refused, leading to a televised police chase. L.A.P.D. units took over the pursuit after Beaird entered the city limits. The vehicle chase ended when Bearid crashed into another car at the intersection of Los Angeles St. and Olympic Blvd, pushing the other car into a fire hydrant.

After the crash, Beaird reportedly did not yield to police instructions, instead walking near the trunk of his banged up Corvette. An officer shot a beanbag round at Beaird, and hit him in the leg. After the non-lethal round was fired, officers reported that Beaird allegedly attempted to walk away from police, and appeared to be reaching for something near his waistband. The officers opened fire, with as many as 21 rounds, killing Beaird. It was later determined that Beaird was unarmed.

In August, the city of Los Angeles paid $5 million to Beaird’s family in an out of court settlement.

This week, the L.A. Police Commission determined that the officers violated policy when they used lethal force against Beaird. The commission did determine that the officer who shot Beaird with the bean bag round was within policy. L.A.P.D. Chief Charlie Beck weighed in on the incident, and the officers’ use of deadly force.

Chief Beck must now make a decision as to what the punishment will be for the three officers, who have all remained relieved of duties since the shooting.

One thing that every American should keep in mind is that like our military, law enforcement officers willingly put themselves in harm’s way for the safety of the American public. Their job is thankless, stressful, and very, very dangerous. One of the most important things that should be communicated to the masses right now is respect for our men and women in law enforcement. They are our relatives, our neighbors and our friends, who serve a necessary role in our communities.