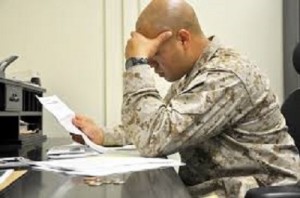 For the second year in a row, the White House is telling Congress that the president intends to cap the military basic pay raise at 1%.

Last year, leading into the “Government Shutdown,” a hot ticket item was the capping of service members’ pay at 1%. This year, President Obama notified Congress that he again is recommending a lower than private-sector wage growth for the men and women who serve in the military. The increase was the lowest basic pay raises since the dawn of the all-volunteer-military era in 1973.

Ongoing budget constraints are being blamed for the cap. But Congress could override the 1% cap and mandate a 1.8 % pay raise for 2015. The 1.8% increase would be more in line with the anticipated rise in private-sector wages.

So far, members in the House have favored a 1.8 % increase, while votes in the Senate have been found to favor the 1% increase. Reaching a compromise on the competing budget bills will likely take the rest of the year.

Many Veteran advocacy groups have insisted that a lower pay increase will negatively impact future military recruiting and destroy the military’s retention efforts. Military advocates are still hopeful that they can sway Congress to support the 1.8% increase, even if it means adding $3.8 billion to the federal deficit over the next five years.

To put the issue in terms of dollars and cents for individual service members, the difference in the two pay plans would be about $195 a year for an E-3 with three years of service. For an E-7 with 10 years, it comes out to $356. For an O-5 with 12 years of service, the lower pay plan would drain about $667 in annual salary.

While the individual sums could be considered small, in the grand scheme of things, for those who have served and the families that they support, it makes a world difference… especially as a matter of principle.

Military families already go without so much. The typical service member’s wages are far lower than a civilian with similar training and experience. Military pay is supplemented by benefits in healthcare and on-base shopping. But the lower earning potential affects a military family’s ability to rent, buy or lease homes and property, and is also a blow to morale.

The majority of active duty, Guard and Reservist service members have endured multiple deployments over the past decade. The men and women still in uniform can expect more deployments, especially as our leaders consider their options regarding ISIL, and as they track the tensions between Russia and Ukraine.