Military Blog
You are here: Home / Marines Treated to a Heroes’ Welcome 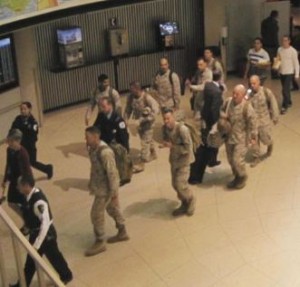 Stephanie Hare is an Illinois native who now lives and works in England. She is also engaged to Marine Corps Capt. Pravin Rajan. Rajan was part of a group of thirteen Marines returning to Camp Pendleton from the Global War on Terror. Flying commercially from Afghanistan to San Diego, the Marines had no shortage of layovers on their journey. The first leg of the group’s US journey began at Baltimore-Washington International Airport, and from there, their next destination was Chicago’s O’Hare Airport. Although she was not even in the States, Hare called her home-state airport to see if they could do anything to help welcome the Marines home.

“I just thought if they could get them some Chicago pizza, champagne or something, that would mean a lot,” Hare said.

Hare spoke to John Colas, a 74-year-old former Marine who volunteers at the O’Hare USO. With only about an hour’s notice, Colas contacted as many different people as he could think of to try and pull off a special welcome for the Marines. Mission accomplished, Mr. Colas.

The Marines arrived in Chicago to a true hero’s welcome. The plane they arrived on received a water salute, with fire trucks on the runway, using water hoses to create an archway for the taxiing plane. The Marines were then met at the terminal by a crowd of police officers, firefighters, USO volunteers and airport workers, who cheered for them.

“There must have been 15 Chicago firemen and an equal number of Chicago police, and they formed a corridor for the Marines when they got off the airplane,” Colas said.

The crowd escorted the Marines to the terminal for the last leg of their journey. The Marines were flying to San Diego International Airport on an American Airlines flight. The airline, which has a policy to upgrade servicemen and women in uniform whenever possible, had six empty seats in first class. The offer was made by the airline to bump up six of the Marines into the first class section. As great as this story has been so far, this is the part of the story that really hits home– seven first class passengers on the flight to San Diego gave up their seats so that the Marines could all sit together- in first class.

“It was incredibly touching,” Capt. Rajan said in a telephone interview from Camp Pendleton. “Afghanistan is a very complex and ambiguous war … and a difficult thing to keep track of, so it is amazing when we are 10 years (into) a war and there is still that kind of community, that level of support, the level of willingness to go out of one’s way.”

Challenges for Veteran Employment New Platform for Veteran Charity: Give an Hour to use Helpouts by Google Scroll to top
Follow a manual added link