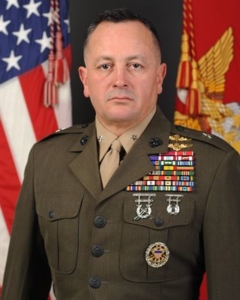 The inspector general’s office has called foul against a Marine brigadier general who misused his aide-de-camp and solicited and accepted gifts from subordinates.

The charges against Brig. Gen. Rick A. Uribe date back to May 2016 through June 2017 when he was the senior Marine in Iraq and served as deputy commanding general and director of the Combined Joint Operations Center (CJOC) in Baghdad.

The female officer aide, whose name was redacted in the report, told inspectors that her “entire existence as aide-de-camp centered on personal servitude” to Uribe.

She was tasked with dropping off and picking up laundry, getting meals, buying unit T-shirts, filling out expense forms for Uribe’s dependent and paying for haircuts. She also reserved gym equipment for him, and often times was forced to sit on the equipment to hold it for him.

Uribe attributed his mistakes in judgement to the demanding deployment that included the retaking of Fallujah from ISIS elements.

“This deployment was very challenging, and the operational tempo demanded that I be in certain places, usually the CJOC for long periods of time.”

Uribe’s predecessor, Maj. Gen. William Mullen III told inspectors he did not ask an aide to carry his bags, pointing to the “example set by the Commandant of the Marine Corps. He carries his own bags… he makes a point of it.”

Mullen’s aide told inspectors that Mullen never asked him to pick up laundry or retrieve meals, even though the aide offered to do some of those tasks.

Through the investigation, Uribe said he “learned a great deal from this process.”

Inspectors had recommended that Uribe’s supervisor take “appropriate action” regarding Uribe’s conduct, but did not specify any specific punishment or reprimand. Uribe’s chain of command took “appropriate administrative action”