Military Blog
You are here: Home1 / Making a Difference- Profiles of Some Immigrant Service Members 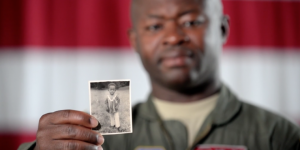 Making a Difference- Profiles of Some Immigrant Service Members

As a nation founded by immigrants, the U.S. has long drawn its strength through the diversity of its citizens. Many of these immigrants have served this country as part of the one percent in the military. Here are just a few:

After fleeing war-torn Nicaragua, 1st Lt. Lizamara Bedolla now serves as an Army nurse at the William Beaumont Army Medical Center’s Surgical Ward at Fort Bliss. “The Army has taught me a lot about tolerance, self-awareness, patience and has opened my eyes to the different people that are all over this country and abroad.”

Although Staff Sgt. Tamba Benjamin wanted to join the Army or Marines, he joined the Air Force to appease his mother. He came to the U.S. from Monrovia, Liberia, via Freetown, Sierra Leone, when he was nine, escaping civil war. Currently assigned to the 407th Expeditionary Comptroller Squadron, Benjamin said, “Living in another country is like sleeping in someone else’s home — you take care of the home.”

It took Pfc. Fortytwo Chotper seven years to make it to the United States from Sudan via a Kenyan refugee camp. He joined the Iowa Army National Guard’s 1168th Transportation Company, not to get his citizenship. “I was just doing it to give thanks to the United States for bringing me here from the refugee camp.” Chotper’s 1168 TC team and Iowa Air National Guard Chief of Staff Brig. Gen. Randy Greenwood joined Chotper at the U.S. District Courthouse in Des Moines in their dress uniforms to watch their brother take the oath of citizenship.

Already a citizen, Staff Sgt. Fadi Chreim, a 386th Expeditionary Logistics Readiness Squadron vehicle operations dispatch chief, joined the Air Force reserve to give back to his adoptive homeland.  “ Part of me wanted to put on that uniform just to say ‘thank you.’”

In March 2017, Pvt. Maria Daume, originally from  Siberia, Russia became the first female Marine to join the infantry through its traditional training pipeline at the age of 18, joining the Fleet Marine Force as a mortarman.

Senior Airman Mina Fawzi of the 407th Expeditionary Logistics Readiness Squadron was born in Cairo, Egypt, and joined the Air Force to support his family.

Mohammad Nadir worked as an interpreter for U.S. servicemembers in Afghanistan, and is now a Marine. “I told my family I was going to come to America and become a Marine, so I did,” Nadir said.

Staff Sgt. Eric Piime, a boom operator in 121 Air Refueling Wing, Ohio Air National Guard. Piime, a native of Ghana, enlisted in the Air Force as “the ultimate way of giving back” to his adopted country.