Military Blog
You are here: Home / For the Sake of Veterans, Lawmakers Must Pass the Vow to Hire Heroes Extension... 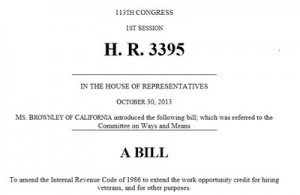 MilitaryConnection.com fully supports the passage of the Vow to Hire Heroes Extension Act of 2013 H.R. 3395. This bill is good for business, employers and Veterans. It is also good for our nation and the economy. It should receive the full support from both sides of the political aisle.

Veterans are a valuable resource that American employers should be utilizing. Doing so improves business and product quality. Today’s Veterans are military-disciplined workers and battle-hardened leaders who are better served in a company’s chain of command than in an unemployment line. Veteran employees can also bring employers tax breaks, if the Vow to Hire Heroes Extension Act gets passed through Congress.

Since 2011, companies that have hired Veterans have been rewarded through the VOW to Hire Heroes Act.  Through the act, the U.S. Government has extended these companies tax breaks, ranging from $2,400 to $9,600 per unemployed Veteran hired, depending on their length of unemployment and other specifics. This program has paved the way for thousands of Veterans to find meaningful careers in the civilian world, and thousands of companies to find quality employees and financial gains.

The original Vow to Hire Heroes Act of 2011 was  bipartisan, bicameral comprehensive legislation designed to lower the unemployment rate of current Veterans. The act focused on education and training current and future Veterans in order to help them transition into the civilian corporate world. These measures included improving the military’s Transition Assistance Program (TAP).

Approval of the Vow to Hire Heroes Extension Act will extend the current benefits and tax credits through December 31, 2016. The new bill will also feature improvements from the current VOW to Hire Heroes Act. Previously, employers and Veteran job-seekers had to utilize an employment agency in order to verify the company’s legitimacy and the Veterans’ unemployment and disability statuses. Under the new bill, an agency is permitted, but is no longer required.

Please join me in contacting your elected officials at www.senate.gov and www.house.gov and urge their support. Time is running out.