Military Blog
You are here: Home1 / It’s Not a Bird or a Plane; It’s a Hoverbike!: Military Co... 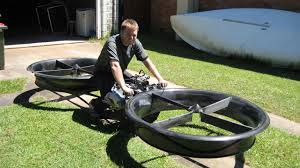 Can you imagine soldiers flying on “hoverbikes” over treacherous terrain while you and I glide around our backyards on one? That may be a reality in the next few years. Currently, the U.S. Army is working on a futuristic hoverbike that could carry one to two soldiers up to ten feet off the ground at speeds of around 60 miles per hour.

The hoverbike is a variation on a quadcopter, and is being developed by engineers in the U.S. at SURVICE Engineering in conjunction with Malloy Aeronautics in the United Kingdom.

The hoverbike was first developed by Chris Malloy in his garage in Australia. Malloy teamed with SURVICE due to its experience dealing with the Department of Defense, and for its proximity to U.S. military facilities.

The Malloy and SURVICE engineers believe they can create a workable model in three to five years, with a commercial version for civilian use also is in the works.

Timothy Vong, a project coordinator with the Army Research Laboratory, said that the military wants the companies to develop the hoverbike with both manned and unmanned capabilities, and would help fine-tune it once a prototype was delivered.

The commercial version of the hoverbike, able to carry about 250 pounds, is projected to cost around $80,000, and will be produced before the military variant. The Army would prefer that the bike have the ability to carry between 400 to 800 pounds, allowing soldiers to pack their weapons and equipment on board.

The hoverbike has sparked some skepticism over its developers’ claims. To be useful for the military, it would have to meet a need that couldn’t be filled by a helicopter, all-terrain or other type of vehicle.

Malloy began developing the first hoverbike while taking classes to get his helicopter pilot’s license in 2009. On his own time and with about $60,000 of his own money, Malloy assembled the first version.

Vong said that the Army is interested in technology that would keep soldiers away from ground threats, and the hoverbike is one of many potential solutions the Army is exploring.

It’s Not a Bird or a Plane; It’s a Hoverbike!: Military Connection: by Debbie Gregory