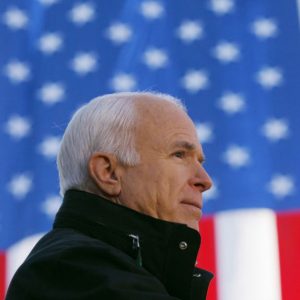 John Sidney McCain III was an American politician and military officer who served as a United States Senator from Arizona from January 1987 until his recent death on August 25, 2018.

McCain followed in the footsteps of his father and grandfather, who both attended the Naval Academy and served in the U.S. Navy.

On October 26, 1967, Lieutenant Commander John McCain III was flying his 23rd bombing mission over North Vietnam when his A-4E Skyhawk was shot down by a missile over Hanoi. McCain fractured both arms and a leg when he ejected from the aircraft, and nearly drowned after he parachuted into Trúc Bạch Lake. Some North Vietnamese pulled him ashore and proceeded to mercilessly beat him.

McCain remained a prisoner of war, bound, beaten and tortured by his North Vietnam captors for five and a half years, until his release on March 14, 1973. During his time as a POW, McCain adhered to the military Code of Conduct, refusing any special treatment, including being released outside the order of capture.

Meghan McCain eloquently honored her father at the memorial service held on September 1st at Washington National Cathedral when she said, “My father was a great man. He was a great warrior. He was a great American. I admired him for all of these things. But I love him because he was a great father.”

John McCain was also very quotable. Among some of his best known quotes are:

“I will not take the low road to the highest office in this land. I want the presidency in the best way, not the worst way.” – Feb. 19, 2000, after losing the South Carolina Republican primary.

“No, ma’am. No, ma’am. He’s a decent, family man, citizen that I just happen to have disagreements with on fundamental issues and that’s what this campaign is all about” – October 2008 at a town hall to a questioner who asked if his opponent for the White House, then-Sen. Barack Obama, was an “Arab” implying he was not American.

“I don’t mind a good fight. For reasons known only to God, I’ve had quite a few tough ones in my life. But I learned an important lesson along the way: In the end, it matters less that you can fight. What you fight for is the real test.” – Sept 4, 2008, speech to the Republican National Convention accepting the party’s presidential nomination.

A grateful nation says thank you for your service, and rest in peace, Senator McCain.