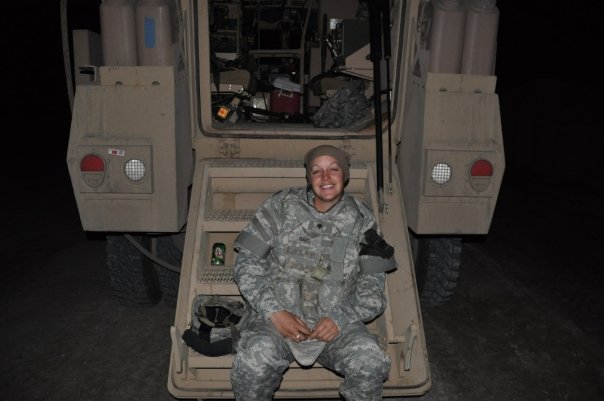 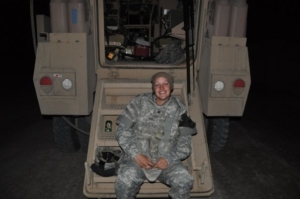 As I began to shut the door, the chill from the refrigerated room blew against my skin and created goosebumps that I would be able to feel for the rest of my life. The room was small and the only contents were of which I had just pushed in: a black bag that contained a vessel that once was made up of dreams, laughter, memories, love, sadness, a life. What it contained now was the very essence of that which this country is made: a soldier that had given the ultimate sacrifice. His life.

In my mind, I kissed a forehead that would never again be kissed by a mother, a child or a lover and I said my goodbyes. I gave one last look into the small room full of a chill, a room that would the resting place until this Soldier took his final flight home to his family – so that they could say their final goodbyes. I tried to swallow, but the lump that had formed in my throat barely let a breath escape. I would never have to wonder what it mean to be lonely. As the door to the refrigerated room closed shut, I felt every essence of the word throughout my whole body. I turned and began my walk into the evening – unlike my fallen comrade, I was still able to experience this simple act.

I had decided to volunteer my time at the mortuary while in Afghanistan because I wanted to give a little to those who had given all. Yes, the possibility of death goes hand-in-hand with being a Soldier, especially when at war. It becomes a possible job hazard as soon as you sign on the dotted line. You do not let it consume your mind during your day-to-day, mission-to-mission tasks. You just accept it and do what you have to do. It had been my first case, and while I went out on daily missions, into harm’s way – into the possibility that I, myself, might not come back – this was the first time I had seen firsthand what war can do to the human body and what war takes from the human soul.

During my walk back to my tent, I couldn’t stop thinking about this Soldier -tying his boots that morning and having no idea that he would not be untying them this night. I wondered what he laughed at today as he and his battle buddy walked to breakfast – or what conversations had gone on in his vehicle right before the ambush. I imagined it was much like the goofy nonsense that we talked about in our truck. Anything to make the time go a little faster and to add a touch of enjoyment to the situation at hand.

I thought about his mother and the grief that was about to fill her heart. The fear as she watched Soldiers in polished uniforms walk to her door. The moment she realizes the reason for the shiny black shoes beyond her door. I thought of his comrades, who will have to load up again and continue on their mission despite the events they survived today.

The image of him sitting on is cot, lacing his boots, just like I did every morning, kept coming to my mind. It was a task that was done everyday, something you never really had to think about doing. I knew at that moment that I would never take tying my shoes for granted again. I knew that I would focus on actually feel the of the material of the lace and the pull it created as I looped the laces to form bows that would hold my shoes on my feet. I knew that from this time forward, I would enjoy tying my shoes. I had a new appreciation for untying my shoes at the end of the day – and a new awareness that the opportunity to untie them at the end of the day was not guaranteed.

I had a new awareness of the world around me. I could feel every little pebble that crunched under my feet. I could hear the whisper of the warm evening breeze as though I had become fluent in its language. Even the smell of the human waste dump left a refreshing singe in my nose. I had a new love for being alive. For the first time, I could understand and appreciate how lucky I was to be taking this walk. The walk was a second chance to appreciate my legs; what they could do for me and the places they would take me. I appreciated the feeling of my arms swinging beside me, the feeling of my pants rubbing against my skin and the tightness of the laces of the boots that held my feet so firmly inside.

As I sat down on my cot, I looked at my boots and the laces I was about to feel in my hands. As I untied them to let my feet escape from the day’s journey. I thought of the Soldier to whom I had just said goodbye and I promised that I would not take for granted this life that I had been given. From this day forward, I would give my utmost best in everything I did – from lying my laces to loving my family.

I untied my laces of my boots, and I untied them for him. My head fell to my pillow with a new awareness of my skin against the cool material and my eyes closed with an awareness of my lashes on my cheek. Sleep surrounded me and brought with it some peace – and I let it take me. The morning would come soon and it would once again be time for me to lace up my boots.

The Healing Power of Art