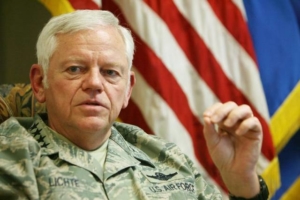 A retired four-star general, who at one point was head of Air Mobility Command, is being investigated for the alleged sexual assault of a female colonel who was under his command.

Retired Gen. Arthur Lichte is the subject of the investigation. Three incidents of alleged sexual assault occurred between April 2007 and April 2009.

Lichte, from New York City, entered the Air Force in 1971 as a distinguished graduate of Manhattan College’s ROTC program. He held command positions at squadron, group and wing levels.

“The Air Force takes all allegations of sexual assault or harassment very seriously,” said Air Force spokeswoman Ann Stefanek. “We are committed to upholding the high standards and values of our service and ensuring an environment of dignity and respect, where sexual assault or harassment is not tolerated, and where there is clear accountability placed on all airmen at every level.”

According to military justice experts, there’s very little guidance on how to prosecute such high-ranking officers, and there are significant barriers to doing so.

Generals are rarely brought to trial within the military justice system, much less convicted, and punishment is often just a demotion in rank. Many members of Congress would prefer that independent military prosecutors handle the cases rather than commanders.

Linda Card, a spokeswoman for the Air Force’s Office of Special Investigations, confirmed the investigation of the allegations against Lichte, but would not comment further or provide additional details about the case.

Victims of sexual assault in the military have two options to report it. They can file a “restricted” report, in which the victim does not identify the attacker and seeks counseling but does not require a criminal investigation. In an “unrestricted” report, as is the case with Lichte’s accuser, the matter is referred to the accuser’s unit commander and triggers a criminal investigation.