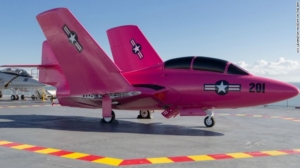 Last month’s breast cancer awareness campaign had a great ally — a retired U.S. Navy fighter jet. To say it was pink would be an understatement!

The Grumman F9F-8 Cougar was painted a shocking shade of pink called “Heliconia.” The plane was on the flight deck of the World War II aircraft carrier USS Lexington, anchored at Corpus Christi, Texas through the end of October.

Thanks to a special paint procedure that included applying liquid dishwashing soap to the latex paint, the color is only temporary.

Decommissioned in 1991, the Lexington was converted to a naval aviation museum.

The Cougars were the Navy’s choice as the first swept-wing plane for the elite Blue Angels flight demonstration team. The Cougar’s were used for various roles, including fighters, ground attack planes, photo reconnaissance, and training aircraft. During the Vietnam War, the two-seater version was used as a forward air control aircraft.

According to the Delta website, 91 cents of every dollar donated to BCRF goes directly to research and awareness programs, and since 1993, BCRF-funded investigators have been deeply involved in every major breakthrough in prevention, diagnosis, treatment and survivorship. Since 2005, the program has raised $11 million.

For 12 years, Delta has organized annual survivor flights with women who’ve beaten the disease, including their own employees.  The flights are nicknamed “Breast Cancer One.”

This year’s flight honored 140 breast cancer survivors who flew from New York to Los Angeles. Festivities began with an event at the gate in JFK before the pink plane made its way to LAX, where survivors and attendees enjoyed another gatehouse event and an overnight stay, including dinner, hotel accommodations and a meet-and-greet with one of BCRF’s world-renowned researchers, Dr. Sofia Merajver from the University of Michigan.

The Pink Plane looks like it’s been wrapped by a giant, bright pink ribbon. It’s also branded with the BCRF logo.