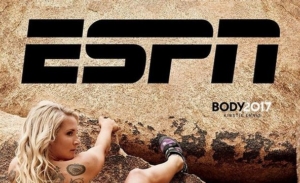 On June 23, 2012, Kirstie Ennis was critically injured in a helicopter crash while serving as an aerial door gunner in Afghanistan’s Helmand province. Just six years into her planned 20 year career, the young Marine suffered a traumatic brain injury and severe damage to her face, spine, left leg and shoulders.

The wounded warrior is not one to let setbacks stand in her way. In spite of having endured 44 surgeries, including the above knee amputation of her left leg, the all-around “badass” recently made the cover of ESPN Magazine’s annual Body Issue, the first veteran to grace its cover.

Produced each year, the special Body Issue features nude and semi-nude photos of male and female athletes from all sports.

Ennis posted a photo of the new cover on her Instagram, saying, “If a little one-legged lady can climb rocks and chase mountains, I promise you, you can do whatever it is your heart desires.”

She added, “Any man, woman, or child facing some sort of adversity has a potential to be inspired by these pictures and seeing somebody who only has been missing their leg for a few years go out and do things that she wasn’t doing with two legs.”

A lifelong athlete, Ennis completed Prince Harry’s Walking with the Wounded charity event, where she and a group of fellow veterans walked 1,000 miles, starting in Northern Scotland, stopping in Wales, and finishing in London.

Ennis also competed in the 2016 Invictus Games, and climbed Mount Kilimanjaro this past April, one of the first female above-the-knee amputees to ever do so.

“Forty-four surgeries, years of therapies, years of learning how to use my brain and body again, but I’ve yet to let it beat me down.”