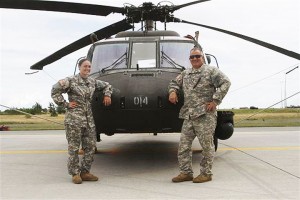 The Polis family from East Patchogue, New York spent many years sharing their love of flying. As a young dad, Stephen Polis piloted his family on many occasions. His daughter, Meghan grew up thinking that her dad’s job as a pilot was pretty cool. Now as an adult, father and daughter have flown together again, but this time, with both of them as pilots.

With a career both as a civilian pilot flying corporate jets and helicopters, and later as a military pilot, dad Stephen has logged more than 10,000 hours in each. Joining the National Guard as a mechanic, then crew chief, Stephen’s focus was understandably on flight school. As New York Army National Guard Chief Warrant Officer 3, Polis had conducted test flights as a maintenance test pilot, and then flew air assault and medical evacuation missions.

The family tradition continued when daughter Meghan enlisted in the National Guard, initially serving as a mechanic, and now as an Army Warrant Officer.

Flying was in her blood, and Meghan proceeded to accomplish her flight training this past February.

Both father and daughter are now UH-60 Black Hawk helicopter pilots assigned to Company B, 3rd Battalion, 142nd Assault Helicopter Battalion, headquartered in Ronkonkoma, New York. They co-piloted a morale flight during the 42nd Aviation Brigade’s annual training for mechanics, fuelers, supply people and other support personnel. The maneuvers displayed the capabilities of the Black Hawk.

“It’s just kind of been a part of the family and I always felt like I could be a part of it,” Meghan said of their family tradition. “By the time I came around to making the decision to do it myself, the little bit of aviation background I had was exactly the route I wanted to go.”

Stephen was a proud father when he had the honor of pinning Meghan’s wings on his daughter during her graduation ceremony, just as his own father had done years before, on the very same stage.

“A lot of family tradition is being created here,” Stephen said. “It was pretty prideful. Very rewarding.”

You might wonder how father and daughter felt, flying beside each other.

“It’s really cool to actually be able to sit in the seat next to him,” said Meghan. “I’ve always kind of felt like I really wanted him to know how I fly, and now I guess he’s got an assessment and it’s not that bad.”

Ultimately, Stephen complimented Meghan on her ability as a pilot, saying she did a good job, making him proud.