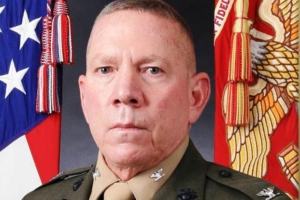 The family of a young girl who was a victim of sexual assault by a Marine colonel has filed a lawsuit against the Marine Corps, holding the service branch accountable for failing to take action on previous conduct unbecoming an officer and a gentleman.

Col. Daniel Wilson was found guilty of sexually abusing a six-year-old girl, the daughter of a major in his command at Camp Lejeune, North Carolina, in summer 2016.

On behalf of her daughter, Adrian Perry has filed tort claims totaling $25 million against the Corps. Perry believes that Wilson’s lewd acts upon her child were preventable, had he been properly investigated and charged with behavior that lost him a command in Australia just 10 days into a six-month tour.

Lt. Gen. Larry Nicholson, commander of III Marine Expeditionary Force in the Pacific, was faulted by the Inspector General of the Marine Corps for failing to initiate an investigation against Wilson and report his misconduct to top leadership after Wilson’s February, 2016, tenure in Darwin, Australia came to an abrupt end.

Wilson had almost immediately been flagged as a problem due to heavy drinking, inappropriate comments in person and via text, and not only requesting racy photos of another Marine officer’s wife, but then sharing the photo he obtained to his Australian counterpart.

Wilson had been referred to as a “predator” within days after his arrival by an Australian officer.

Adrian Perry believes that had Wilson’s behavior in Australia been punished, he would have never been able to abuse her daughter.

“It disgusts me to think that my children would ever have to pay for mental health care because of what Wilson did to them,” Mrs. Perry said.

Adding that her legal actions were not vengeful, she said, “To me, this is just one more step in the fight toward making sure my children are taken care of.”