Military Blog
You are here: Home / Ecstasy Designated as “Breakthrough Therapy” for PTSD by FDA 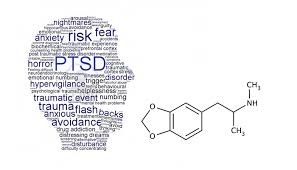 Following years of lobbying and research on the medical uses of methylenedioxymethamphetamine, or MDMA, the U.S. Food and Drug Administration has decided to move forward with the drug.

MDMA, better known as ecstasy, is showing promise as a tool for treating PTSD. But the prospect of a government-sanctioned psychedelic drug has generated both excitement and concern.

The non-profit organization that has been conducting trials, the Multidisciplinary Association for Psychedelic Studies (MAPS) has been championing and fundraising for MDMA research for roughly 30 years. This has opened the door to scientists studying new uses for other illegal psychedelics like LSD and psilocybin (commonly known as magic mushrooms).

Researchers believe that MDMA reduces the fear response and triggers the release of serotonin and other neurotransmitters that induce a feeling of well-being.

But due to the stigma attached to Multidisciplinary Association for Psychedelic Studies (MAPS) many military and government leaders are hesitate to embrace them. Currently, the only two drugs approved for treating PTSD are Zoloft and Paxil, but both drugs have proven to be largely ineffective in treating the estimated 11-20 percent of soldiers who have served in Iraq or Afghanistan that suffer from PTSD.

In clinical trials with 107 patients closely monitored by the FDA, 61 percent reported major reductions in symptoms — to the point where they no longer fit the criteria for PTSD. Follow-up studies a year later found 67 percent no longer had PTSD.

MDMA researchers point out the key difference between MDMA and street ecstasy (along with another variant called “molly”) is the street versions often contain other harmful drugs, experts say. Sometimes the pills don’t even contain MDMA.

Hanging Out with Another Veteran Can be the Best Therapy Free Tickets Available for Military, Veterans and Military Families Scroll to top
Follow a manual added link