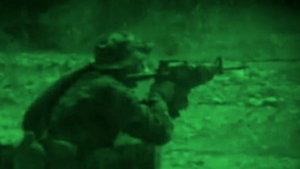 As his SEAL Team Six unit raided a Taliban hide-out where an American doctor was being held hostage, Chief Special Warfare Operator Edward Byers displayed actions that have earned him the Medal of Honor. Tragically, one member of the team was killed.

Byers will be the first sailor in a decade to receive the award. Although his actions in Afghanistan in 2012 have been deemed heroic and self-sacrificing, few details about the rescue or Byers’ actions have been made public.

“There’s no margin of doubt or possibility of error in awarding this honor,” a defense official said. “His actions were so conspicuous in terms of bravery and self-sacrifice that they clearly distinguished him to be worthy of the award, including risk of his own life.”

While the White House usually gives a detailed account of what a service member has done to be awarded the Medal of Honor, Byers commendation cites only “his courageous actions while serving as part of a team that rescued an American civilian being held hostage in Afghanistan, December 8-9, 2012.”

Dr. Dilip Joseph, the medical director for Colorado faith-based nonprofit Morningstar Development, had been held captive in a shack by ransom-seeking Taliban fighters in the mountains east of Kabul.

On December 9th, just after midnight, the SEALs burst in to the shack. The forward-most SEAL, Petty Officer 1st Class Nicolas Checque, was shot in the forehead. “Is Dilip Joseph here?” shouted another member of the SEAL team, wearing night-vision goggles and speaking English. When Joseph identified himself, Byers immediately laid down on top of him to protect him from the fighting. As they waited for a helicopter 12 minutes out, the SEALs protected Joseph by “sandwiching” him between two team members.

Byers and other medics performed CPR on Checque during the ride to Bagram Airfield, but Checque, 28, was pronounced dead.

Byers joined the Navy in 1998, serving as a hospital corpsman before attending Basic Underwater Demolition/SEAL training in 2002.

A Toledo, Ohio native, 36 year old Byers will be the 11th living service member to receive the medal for actions in Afghanistan and the third sailor to earn the distinction since Sept. 11, 2001.

President Obama will present Byers with the nation’s highest award for valor in a February 29th ceremony at the White House.