Military Blog
You are here: Home1 / Do We Have A Fighter Pilot Shortage? 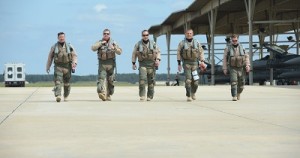 Several Air Force officials have reported that the U.S. Air Force is facing a shortage of more than 500 fighter pilots. The divide is expected to widen to more than 800 by 2022.

The shortage stems from a reduction in the number of active duty fighter squadrons.

In a written statement, Air Force officials stated that “without these fighter pilots, the Air Force will be very challenged to continue to provide the air supremacy upon which all our other forces depend.,” The statement said the shortage would affect air operations expertise and lead to a “gradual erosion of fighter pilot experience in test and training.”

Lieutenant General James Holmes, the deputy chief of staff for strategic plans and requirements for the Air Force, said only about four experienced fighter pilots are being produced each year.

Holmes said to make up the deficit, the Air Force would likely put new active duty pilots into guard and reserve squadrons to gain experience.

There is also a shortage of drone operators. In Capitol Hill testimony, Gen. Herbert “Hawk” Carlisle said that the Air Force needs approximately 200 more drone pilots in order to adequately carry out current missions. He added that the “remote piloted aircraft enterprise is one that’s in high demand, we are in high demand for fighters as well, we don’t have enough of either.”