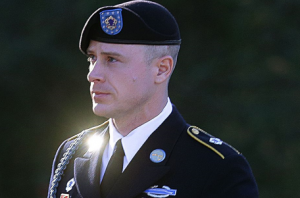 Not one to mince words, Presidential candidate Donald Trump has been vocal with his ideas for punishing Army Sgt. Bowe Bergdahl. Trump has said that Bergdahl’s fate should include execution, being thrown out of a plane without a parachute, or being dropped in terrorist territory “before we bomb the hell out of ISIS.”

Bergdahl, the soldier who was captured by the Taliban after abandoning his post in Afgahnistan and freed five years later in a prisoner swap, is facing a maximum sentence of life in prison.

Bergdahl was taken captive within hours of leaving his patrol base, Observation Post Mest, and held for the next five years in Pakistan by the Haqqani network, a group linked with the Taliban. He was tortured regularly, starved and tried to escape repeatedly, said Terrence Russell, an official with the Pentagon’s Joint Personnel Recovery Agency.

Bergdahl’s defense attorneys argue Trump’s attacks are damaging Bergdahl’s chances for a fair trial. The attorneys reference comments that the Republican presidential front-runner keeps repeating, including that five soldiers died trying to save Bergdahl, which the Pentagon has confirmed as being untrue.

Trump and Senator John McCain (R-Ariz.)  have been the most vocal critics, trying to pressure the military to punish Bergdahl.

“When they get that kind of media attention, it gets information in front of a jury,” said Philip Cave, a retired Navy attorney who’s not involved in the case. “There is concern that all of this information … prejudices Bergdahl in getting a fair trial.”