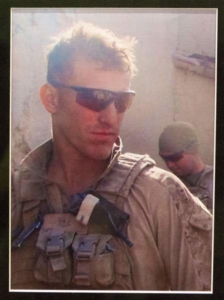 Goose was on his last foot patrol.

Newly married Lance Cpl. Joseph Ryan “Goose” Giese was a proud Marine. He was looking forward to returning home to his family from Afghanistan.  But in January, 2011, a blast from an improvised explosive device took the life of the 24 year old.

It took years, but a couple of Goose’s possessions have finally found their way home.

First was the pocket-sized Bible Goose carried with him when he deployed. A Marine Goose had served with saw the bible in the possession of another soldier, who didn’t recall how he had come to have it. The Marine told him about Ryan and took the Bible, sending back to Goose’s father, Larry Giese.

Last month, just before Father’s Day, Larry, received a package that contained his son’s dog tag. It was found by a soldier who was in the area near where Goose died. The soldier sent it to his dad, Pete Metzger, with the request that he track down Goose’s family and return it.

Metzger found Ryan’s widow in Atlanta, GA. She asked Larry Giese to call Metzger, because if it turned out to be true, she wanted Goose’s dad to handle it. Larry did, and shortly thereafter, the tag was in the Larry’s hands.

A Marine buddy of Ryan’s told Larry Giese the single tag would have been his “boot tag,” the one worn in a soldier’s boot instead of around the neck.

Giese has heard there is some talk of possible putting his son’s tag in a Marine museum, but he’s not going to part with it any time soon.

“It’s weird, you know? Here I am, I’m a big, bad Marine, I was a cop — but boy oh boy, that emotional part just kicks my butt,” Giese said. “In boot camp he made copies of his dog tag to give me and his sister. But now I have an original.”