Military Blog
You are here: Home1 / Clinton and Trump to Address Military and Veteran Issues 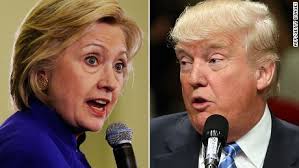