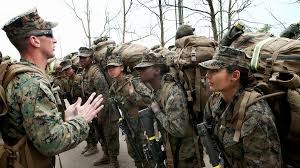 Defense Secretary Ash Carter said that he is ordering the military to open all combat jobs to women. Up until now, ground combat positions have largely been closed off to women, at least officially.

“As long as they qualify and meet the standards, women will now be able to contribute to our mission in ways they could not before,” Carter said.

Back in 2013, then-Defense Secretary Leon Panetta rescinded a 1994 directive that barred women from ground combat units, but gave each branch until 2016 to evaluate the implications and request any exemptions for specific jobs to remain male-only.

Women represent 14% of the 1.4 million active military personnel. Carter noted that about 220,000 military jobs were currently closed to women and would be opened up because of his decision, allowing women to serve in such roles as driving tanks, firing mortars and leading infantry soldiers into combat.

The most immediate issue will be implementation plans, making sure that they are sensible and fair, and not an attempt to hide non-compliance.

Carter said the military would maintain high standards for all combat assignments but explained that some standards were being modified after studies demonstrated they were “outdated” or not reflective of the skills necessary for the jobs.

Defense Secretary Carter says this is about equal opportunity. There are no quotas or guarantees.

“Our force of the future must continue to benefit from the best people America has to offer,” Carter said. “In the 21st century, that includes drawing strength from the broadest possible pool of people.”

Congress has 30 days to review the change and the armed services have until January 1st  to submit plans to implement it.