Military Blog
You are here: Home1 / Caretaker of the Vietnam Moving Wall 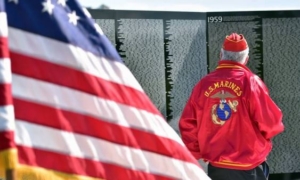 Paul Chen joined the Navy in 1974 and served his country for several years. Chen continues his service today as the overseer of the Vietnam Moving Wall, which has been touring the country for more than 30 years.

The traveling memorial wall is a half-size replica of the Vietnam Veterans Memorial in Washington, D.C. The wall visits locations where sponsors have arranged to cover the moving costs and manpower.

Some visitors look for names of friends, family, high school classmates — names that evoked half-century-old memories into the present.

As the wall’s caretaker, Chen, who started as a substitute driver, says he has his dream job. He travels across the country in a truck that caries his valued cargo. The wall measures 254 feet long, and its 74 panels range from four to six feet tall. It packs up into metal cases.

“I have truckers on the roads who honk their horns at me and snap a salute in support,’’ Chen said.

If he has any mechanical issues while he’s on the road, he’s not alone for long.

“I’ve had six, seven and eight vehicles with people who wanted to help me,’’ Chen said. “I tell them I can handle a simple flat tire, but they still want to help.’’

He knows many of the 58,307 names on the wall by heart; eight are women who were military nurses, he said.

Unfortunately, the wall is still growing. Wounds and illnesses suffered by American forces during the conflict continue to claim lives. So far this year, eight more names will be added to the Moving Wall and to the memorial in Washington.