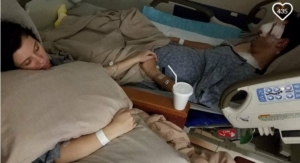 Nowadays, there’s no shortage of ways to buy and sell goods without stepping foot into a store. But this also carries an inherent risk, as a military couple in Portsmouth, VA recently found out the hard way.

Twenty-year-old sailor Frederick and his four-months-pregnant wife, Emily, were meeting up with a person they had connected with on app OfferUp to purchase a cell phone. The location was supposedly where the seller was babysitting. When they arrived, their car was surrounded by a group of six low-life thugs, one of which opened fire on the couple.

Frederick was shot through his arm, chest, and temple, causing permanent vision loss in his left eye. Emily was hit in the chest, just missing her heart, but sparing injury to their unborn child. She does, however, have a collapsed lung.

Although the couple had $300 in cash, they were not robbed. It is believed that the shooting was part of a gang initiation.

Frederick managed to start driving the car away, but due to limited vision from his injuries, he crashed into a car a few houses away. Emily drove the rest of the way to a nearby convenience store, where police were summoned.

After the shooting, the Portsmouth Police announced a new designated safe location for people to meet when they are buying or selling items. The family says they were told by police that there have been several incidents reported from people using the OfferUp app, but it could have just as easily been Craigslist, Facebook Marketplace, etc.

Only the couple’s first names are being used for safety reasons.

If you can help this young couple face the long road to recovery, please visit their GoFundMe page at: www.gofundme.com/fredrick-and-emily-fund.