Military Blog
You are here: Home1 / Band of Brothers in on Gender Reveal for Fallen Soldier 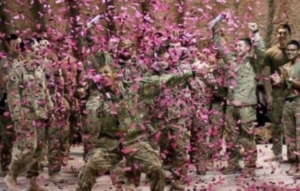 The wife of a Fort Bragg soldier who was killed in Afghanistan in August had a lot of help when it came time to reveal the gender of the baby she is expecting in March.

Brittany Harris, pregnant with the couple’s first child, called upon her late husband’s band of brothers to pull the popper and reveal a sea of pink confetti. The men of the 82nd’s 2nd Battalion, 504th Infantry Regiment, 1st Brigade Combat Team couldn’t have been happier.
On August 2nd , Spc. Chris Harris died in Afghanistan, one of two soldiers from Fort Bragg’s 82nd Airborne killed when an IED struck their convoy near Kandahar.

Earlier this month, Harris’ brother soldiers, who are still deployed downrange, posted a video welcoming  Christian Michelle Harris to the company, as soon as she arrives.

Pfc. Joel Crunk, who served with Harris, posted the video to his YouTube account. “August 2 2017 Chris Harris laid down his life for our country. His newly wed wife was expecting their first child,” Crunk wrote. “The reveal is in Afghanistan with the men who fought by his side. We are happy to welcome the new member of our company.”

Harris joined the Army in Oct. 2013, and was killed, along with Sgt. Jonathon Hunter, on their first deployment.

Brittany said, “Everyone that I’ve met, before Chris passed and after, if they’re in the military, they’ve treated me like actual family or royalty, actually.”

Christopher Michael Harris’ daughter, Christian Michelle, will have no shortage of “uncles” who will always have her six.