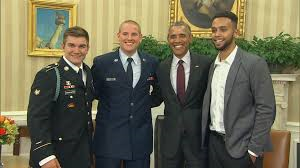 When the Air Force sought to honor Airman 1st Class Spencer Stone for his heroic actions in stopping a terrorist gunman on a French train this summer, the options were limited.

Since the incident occurred in the French countryside, far from any declared combat zones, Stone was not eligible for traditional valor medals like the Bronze Star or Silver Star. Those medals are limited to formal combat zones or military operations against a specified enemy.

The Air Force opted to give Stone an Airman’s Medal, an honor that technically ranks above the Bronze Star in the military’s official medals “order of precedence.”

President Obama met with Stone, U.S. Army Specialist Alek Skarlatos, and Anthony Sadler, who also participated in the takedown of gunman Ayoub El-Khazzani. The president said the three young Americans represented “the very best of America and the American character.”

The White House visit was just one of the accolades the service members received Thursday. In addition to his Airman’s Medal, Stone was also awarded a Purple Heart at a Pentagon ceremony. Skarlatos is receiving the Soldier’s medal, and Sadler is getting a civilian award. Stone will reportedly be promoted two ranks, bypassing the level of senior airman to reach staff sergeant.

The three friends have already been awarded France’s highest decoration, the Legion D’honneur, for their heroism. They were also honored with a parade on September 11th in Sacramento.

In an interesting turn of events, Skarlatos has teamed up with professional dancer Lindsay Arnold to compete on the new season of Dancing With the Stars. He danced a foxtrot to Afrojack’s “Ten Feet Tall” with partner Arnold, receiving rave reviews. In less than a month, the 22-year-old’s dancing inexperience seems to have been eradicated, along with his anonymity.