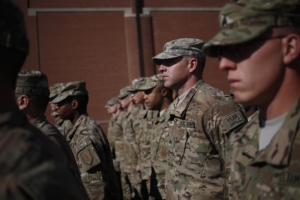 The U.S. Army is working to provide more soldiers with civilian credentials so they can find jobs for veterans after they leave service in their fields.

Maintaining the “Army Strong” values and leadership within communities, the program is expanding to improve coordination between the active and reserve components so that they can parlay their military experience not just into civilian jobs for military, but civilian careers for military.

For example, take soldier truck drivers; every year, the Army trains thousands of motor transport operators, designated by the military occupational specialty 88M, who drive such vehicles as the Heavy Equipment Transport System, or HETS.

“Is there any reason why we couldn’t, without a whole lot of effort, include a commercial driver’s license in the program?” asked Maj. Gen. Hugh Van Roosen, the service’s deputy chief of staff for manpower and personnel plans, programs and policies. “We’re always struggling with hours in the training day. However, we have to balance that against whatever we can do to ensure a soldier who’s leaving has as soft a landing as possible.”

The general added that there are other fields that may lend themselves to credentialing for veterans include logistics, mechanics and communications.

“We’re already doing credentialing in our medical fields … [but] there’s a lot of areas, particularly in our IT fields, that we don’t do anything like that, and there’s not any particularly good reason for it,” he said.

Sen. Elizabeth Warren, D-Mass., noting at a recent hearing of the Senate Armed Services Committee’s Personnel Subcommittee: “America spends hundreds of millions of dollars each year to train service members to do highly skilled jobs … they should be ready to move into civilian life with [the help of] certifications.”

She said that the Senate “wants to work on making it easier for our service members when they leave the service to have that credential in hand and recognized in all 54 jurisdictions of the United States.”