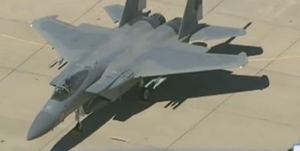 Several Air Force officials have reported that the U.S. Air Force is facing a shortage of more than 1,000 fighter pilots.

Lieutenant General James Holmes, the deputy chief of staff for strategic plans and requirements for the Air Force, said only about four experienced fighter pilots are being produced each year. Retention is also a major issue.

Air Force Secretary Deborah James is looking to Congress for the ability to boost financial incentives to recruit and keep pilots. She and Gen. David L. Goldfein, the service’s new top officer, attributed the shortfall to a wave of hiring in the commercial airline industry, high demand for air power keeping pilots deployed and away from their families, and a reduction in training while at home prompted by heavy usage and budget constraints.