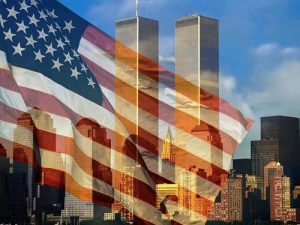 For me, as for many of us, the morning of September 11, 2001 started off like any other. It was a beautiful day in St. Charles, Missouri. My wife & I had one young son & one on the way. An Army guy, I was a traditional National Guardsman and a small business owner with about 1,000 things going on at any given time.

I was in the process of taking my son to daycare when I first heard news of the attack. As I started the car & turned on the radio, it was the only news on every station. The second plane had already made impact by the time I tuned in. I recall that news reports were relaying some concern over a few other commercial airliners that weren’t communicating with air traffic control, with the talk of scrambling military fighter jets. I prayed that those pilots wouldn’t be placed in the position of having to shoot down a commercial airliner.

I hadn’t left the driveway yet, and I looked in the rearview mirror at my young son, sitting in his car seat. I remember having that sinking feeling that so much of our world had just forever changed. I knew our military world had just changed, too, but I doubt anyone could have predicted how much. As a member of a Field Artillery battalion’s operations staff, there were exercises in the coming training year that I was helping to prepare for, and the artilleryman in me knew we were going to have to ‘adjust fire’ regarding our yearly training plan. I figured that our combat arms unit, part of the Missouri Army National Guard, would deploy…it was just a matter of time.

And deploy we did, just like the rest of the Active and Reserve Components. We deployed more than once, and to various parts of the world. I was already a combat Vet – I deployed with the 1st Infantry Division to Operation Desert Storm a decade earlier, while on active duty – but I didn’t have a young family back then. Sitting in that driveway, looking at my young son & thinking of the one we had on the way, I was worried for their safety & the world they were going to grow up in.

Fast forward to 2017. I hung up the uniform for good last summer, and a bittersweet day it was. I imagine the events of 9/11 – and the subsequent training, unique duty positions, and deployments –  altered what would have been a shorter military career. Like many of my colleagues, I’ve missed years of family time. I’ve lost Brothers & Sisters to combat and to suicide. I’ve forged some incredible friendships and witnessed some awesome things through a multinational lens. These 17 years have come and gone with blinding speed, and it seems like the next time I turn around, it will be the 25th or 50th anniversary of that fateful day. But I know, beyond all doubt, that we will never forget…