Military Blog
You are here: Home / 2018 Military Spouse of the Year 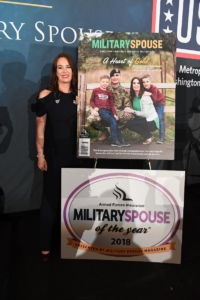 2018 Military Spouse of the Year

The Armed Forces Insurance Military Spouse of the Year for 2018 was revealed during the USO of Metropolitan Washington-Baltimore’s 36th Annual Awards Gala in Washington, D.C.

The role of the military spouse is one of selflessness and courage.

In 2013, Krista’s first husband, Staff Sgt. Michael Simpson was killed in Afghanistan. She went on to co-found The Unquiet Professional, a registered 501(c)3 charitable organization committed to recognizing and honoring our nation’s Gold Star Families and veterans by providing rewarding and purposeful opportunities.

Krista also works as a speaker to raise money for Folds of Honor, a nonprofit that provides scholarships to families of fallen and wounded service members, among her many activities.

“As Army Spouse of the Year, I am honored to have the opportunity to not only represent Special Forces spouses but all Army spouses,” said Krista of the honor she was awarded. “It’s very humbling being considered for overall Military Spouse of the Year. This journey has been humbling. As I read many of the profiles, I felt so honored to be a part of such selfless servants.”

Referring to all the spouses who were nominated, she said, “We are stronger together. We all should be standing up here right now.”

The Andersons are based at Joint Base Lewis-McChord, Washington.