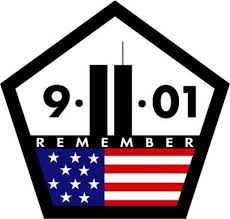 We will never forget.

For most Americans, we have a strong recollection of where we were and what we were doing on September 11, 2001 when the first plane flew into the Twin Towers in NYC. As the horrific events of the day unfolded, we knew that our world had changed forever. With every passing year, I am increasingly concerned by the number of people in my world who fail to remember the devastation of 9/11/2001 and the unification of our country that followed. The day is forever etched in my mind – as an American, a New Yorker and as a daughter.

I was a recent college graduate living in Baltimore, MD, about an hour away from the Pentagon. When I heard news of the first plane, I grabbed my phone and called my father – who worked across the street from the Twin Towers. As my call was placed prior to the true chaos of the day, I was able to get through right away. My father was at his desk. He was sure that the pilot of the plane had a heart attack. He was present for the 1993 World Trade Center bombing, yet neither of us suspected or mentioned terrorism. Minutes after we ended our call, he would call my mom to tell her that he was leaving the building because a second plane had hit and it couldn’t be an accident. It would be over 15 hours before we heard from him and I am still so very grateful that he made it out physically unscathed.

I grew up in Staten Island, NY. I am the product of parents who met on Wall Street who spent many of my childhood days in the Twin Towers, visiting my father at work. I was on the phone with my aunt when the towers began their collapse. Her screams as she watched from her work rooftop preceded the visual collapse on the television to which we were glued. The Twin Towers, the World Trade Center, was so much more than just an address, more than an icon. Those towers were “home” for us. The perfect NYC skyline was the backdrop to my childhood.

Like most of America, I watched the Towers collapse on live TV. I sat on a college futon, unblinking, clasping the hands of the dorm room’s residents, all of whom were from NY. I searched the dusty faces in the crowd for the familiar face of my father. I prayed for one of their spontaneous interviews to be him. Being a banker isn’t supposed to be a dangerous and life threatening job! At around 11:30 that morning, I was finally able to get in touch with my mom. She knew my father had left his building, but had not heard from him since. We had nothing to do but wait.

My father, whose building had a pedestrian walkway that stretched over the bustling NYC street below and connected it to one of the towers, had opted to leave before any evacuation was issued. He took what he needed and started downstairs. Weeks later, when we spoke about that morning, he told me that leaving the building was like living in a bad sci-fi movie. He described the collapse of the Towers – the noise. The cloud of dust that chased the business men and women on the street. My father ducked in an alley and hid behind a dumpster, keeping himself safe from the barreling debris. Whenever I remember that morning, I shudder to think of what all of the survivors and first responders witnessed.

Yesterday, on our ride to school, we drove past the “Walk of Heroes.” Almost 3,000 American flags line the sidewalks in Parkville, MD. My children, all born well after that terrible day, asked me about the flags. So I told them the story of their Papou – one of the men who survived the 2001 Terror Attack on our beautiful country. I told them about some of the people represented by those nearly 3,000 flags. I told them because it is our legacy. I will never forget. We will never forget. 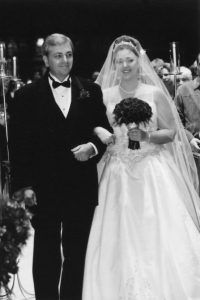 My Dad, Bill Baydalla, was able to escort me down the aisle in 2003 and has been able to enjoy all of his grandchildren in the years that followed – a gift that we do not take for granted as we know so many were robbed of the same experiences.

We would love to spend the next few days honoring the many heroes of 9/11/2001. Do you have a personal story regarding September 11th, our nation’s heroes or the military? Please share it by emailing [email protected]. We might just feature your story on our blog!